Of the Gods: Phanes, God of Fauna

Phanes is "The Horned God". He is lord of all natural creatures, including Man. He is the God of Life, and held in highest regard among all other gods throughout Calabria. He is sometimes depicted with rams horns, at other times with the antlers of a stag. He represents the connectedness of all living things to one another. He is Master of the Wild Hunt, which is said to guide the spirits of the slain to the the afterlife. He is the god of fertility, passion, and art.


The seveth day of the week is Phanesdag, marking the seventh day of Creation when man and the other animals came into the world.


Diana, Archon of animals, taught the skills of hunting, shepherding, and animal husbandry.

The festival of Phanes is in mid Spring, and is the most joyous of all festivals in Calabria. A child born on this day is said to be particularly blessed.

The pomegranate is a symbols of Phanes, as is the foliate egg.


The undead shun the symbol of Phanes. Some few mortals who walk in his path have power over them.
Posted by Niccodaemus at 8:07 PM 8 comments:

Of the Gods: Phusis, God of Flora

Phusis is lord of all plants; trees, grass crops, vines, roots, and fungi. He is revered by all who rely on plants for sustenance; the woodsman, the farmer, the shepherd who grazes his flock. He is despised by creatures of darkness, who feast only on the flesh of the living, and the undead, who recoil at many of the creations of Phusis.

Phusis has many names; Green Man, John Barleycorn, Jack-in-the-Green, the Woodwose. The sixth day of the week is called Grunesdad, recalling the sixth day of Creation when, when plants sprang from the earth.


Callawin was the Archon of plants. It was he who taught man the secrets of tilling the earth and sewing the field. It was he who revealed the poisons and medicines within plants, and the secret of fermentation.
Carvings of Phusis in his Green Man incarnation are common throughout Calabria. Festivals in the Spring and Fall celebrate Phusis in his sewing and harvesting facets.
Posted by Niccodaemus at 10:04 PM 2 comments:

Of the Gods: Kronos, God of Time

Kronos is the lord of Karma as Cause and Effect, as well as the Father of Entropy. He is revered by strategists, and all who plan for their future, as well as prisoners, parted lovers, and all who wish that time would fly more swiftly.

The first day of the week is called Kronosdag. It recalls the first day of Creation, when Cause and Effect came into being. The first age of the gods was a time of war, with Unmaking the most powerful of weapons. Kronos then forged the Ouroboros, that what was was Made could not be Unmade. There are those who theorize that should the Ouroboros ever be broken, that all Creation would be as risk of destruction.


Darkstar was the Archon of Time. It was he who taught men how to craft the millstone, the winch, and the gear. Dwarves learned these lessons eagerly.

The New Year is the Festival of Kronos. His temples contain elaborate clockwork mechanisms.

Elves pay particular reverence to Kronos, as they are rooted in the element of Time, as is their homeland, Tir Na Nog.
Posted by Niccodaemus at 8:00 PM No comments:

Of the Gods: Aeros, God of the Air

Aeros is the lord of the sky and the winds. Millers, sailors, and those who rely on the harnessed power of wind call on him. His children are Boreus, Zephyrus, Eurus, and Notus. 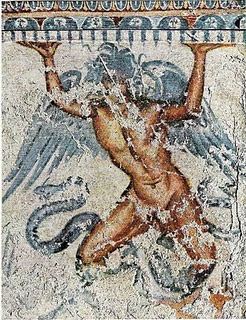 Zachraiel was the Archon of Air. It was he who taught the art of sailmaking to men.


Near the major cities of Calabria are Temples of the Four Winds, each topped with a bronze weather vane depicting Aeros. The wand he holds points in the direction of the blowing wind.

The Festival of the Winds occurs in early spring. It is observed through the flying of kites, demonstrations of falconry, and the celebration of vocal music.

Mountain tops and seashores are sites sacred to Aeros.

Posted by Niccodaemus at 8:05 PM No comments:

Find out More: SOPA/PIPA
Posted by Niccodaemus at 6:21 AM No comments:

Of the Gods: Gaia, Goddess of the Earth

Gaia is the earth goddess, from whom all growing things spring. She is revered by farmers, vintners, and all who make their living from the cultivation of plants.

Aesther, Archon of Earth, taught the first smiths to forge the plowshare and the sword. She taught the masons the secrets of making brick and mortar. Her handiwork is seen in earth formations throughout Calabria.

Smiths have a special adoration of Gaia, as the metals they work with are of the earth itself. Dwarves are bound to her, and have vast temples beneath the earth in honor of her.

Gaia's fury is demonstrated in the wrath of the Stone Giants.

Posted by Niccodaemus at 1:44 PM No comments:

Of the Gods: Hydros of the Waters

Hyrdos, whom some call Aquos, is the dual faced deity of the waters. Hyrdos is sometimes depicted as a couple twisted in a loving embrace.
In his male form, he is Triton, Lord of the Briny Sea, God of the Tempest. All seafarers put their trust in him. Sea Caves are his temples, and tales tell of cities that lie at the bottom of the oceans, where  all who dwell are his followers.

In her female form, she is Danu, Lady of the Lakes, Mistress of the Streams. Her sacred sites are springs, wells, and sacred rivers. The Danuté which flows through the Merchant's Republic is her namesake.

Selena, Archon of the Waters, is responsible for the sacred wells and springs throughout Calabria. She called forth the water from the springs, and with her staff marked the sites of wells to be dug. Many of these sites have retained their natural state, but others have been built into bath houses and temples. Many such places have miraculous healing powers.

Sea caves where the fresh water of rivers mix with the salty ocean are particularly honored. In such brackish waters the god and goddess are re-united. In such caves many marriages are ceremonies are performed and consummated.


The Danuté River, which flows through the Merchant's Republic, is the site of an annual pilgrimage during the Feast of the Waters, which occurs on the Spring equinox. Pilgrims travel from throughout Calabria and beyond to bathe in the cleansing and healing waters of the Danuté.

There are many sad tales of denizens of the waters, and their ill-fated attraction to mortals.

Posted by Niccodaemus at 9:01 AM No comments:

Of the Gods: Pyros, God of Fire

Pyros is the God of Fire, Sun, Light, The Forge and the Hearth.

Samual was the Archon of Fire, and it was he who taught the Secret of the Flame to Man.

Villages throughout Calabria host an ancient round tower, Tower of the Eternal Flame. These towers average over 100 feet tall, and are some 20 to 30 feet in diameter. At the top is a chamber with windows facing each of the cardinal directions, and in this chamber a fire always burns. A devotee Path of Pyros spends his or her life within the tower. Tributes in honor of Pyros are left in a small room at the base of the tower. Wanderers traveling at night can often identify a town in the distance by light from such a tower.


The Cathedrals of Calabria each hold a shrine to Pyros. Fire is one of the five elements (Earth, Air, Fire, Water, and Time) which make up all Flora and Fauna.

Volcanic sites are particularly significant places for worshippers of Pyros.

Of course among more isolated people, simple rituals suffice.
Posted by Niccodaemus at 12:14 PM No comments:

Fenrow Parish extends from the Mern River to the eastern route of the Via Imperium through Merchant's Republic in County Carr. The Village of Fenrow lies about 2 leauges southwest of Carrdech. The territory is mostly gently rolling farmland, with several small groves. Carrdech has a population of some 6,000. The Village of Fenrow is home to nearly 800 people. Another 1,300 people live throughout the parish. Carrdech lies nearly 5 miles from the Mern River, across which lies the sitster town of Carnach in Harrow Parish. The Mern is a widely used trade route in the Republic, particularly near Carrnach through the Dire Bogs where the western leg of the Via Imperium is impassible by large caravans.
Life is pleasant for the people of Fenrow Parish, in a countryside unmarred by war for generations.
The area is blanketed in farms, with grain and livestock being the main resources of the region.
Numerous Imperial ruins dot the landscape. Most are shunned by the locals as the dwelling of ghosts, spirits, and Sidhe.


The Town of Carrdech is famed for its tailors and weavers. The finest rainments in Calabria are fashioned in Carrdech.

The Greenwood is the second largest contiguous woodland in Calabria after Woodbury Forest. Situated between the Iron Hills and the Merchant's Republic, The Greenwood a lush woodland of Oak, Ash, Yew, Chestnut, Alder, Rowan, Maple, and Elm. 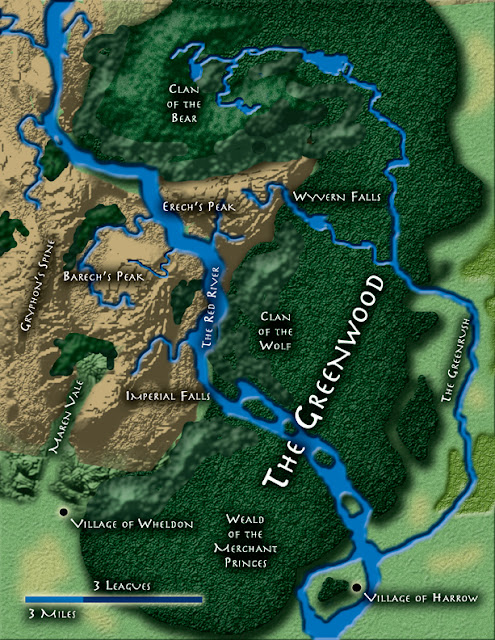 The forest is divided into three distinct sections, two of which are dedicated to the Clans of the Men of Old;  of the Clan of the Bear, and the Clan of the Wolf. The third and southernmost section is the Weald of the Merchant Princes.

The Clan of the Bear is bordered by The Greenrush on the south, and extends to the northermost reaches of the forest. All forestry in this area is done by consent of the Clan of the Bear. The steading halls of the clan are situated in the sloped woodlands of the Iron Hills.


The Clan of the Wolf spans from the Red River to the south, and The Greenrush to the north. The steading halls overlook the gorge of the Red River, some 1000 feet below.

The Weald of the Merchant Princes extends from the Red River to the southernmost reaches of the forest. The Merchant's Republic has long made use of this land for foresting and hunting. It it still called Kingsweald by some, an antiquated term dating back to the Empire.


Wyvern Falls drop precipitously from near Erech's Peak (el. 6,000 feet), down almost 4000 feet to the forested floor below. The lake near the bottom of the falls is neutral ground between the Clans of Bear and Wolf, and has been the site of many negotiations between the clans.

Imperial Falls cascade some 1800 feet over the course of less than a mile. Further up, the Red River continues to climb toward the summit of the Iron Hills, nearly 13,000 feet above the lands below.

Barech's Peak climbs nearly 8,000 feet, and is said to be the home of giants.


The Gryphon's Spine, at an elevation of 10,000 feet, is home to the Clan of the Gryphon. The peaks above 10,000 feet are seldom without snow gracing their caps.


Maren Vale conceals the ancient burial tombs of Imperial and Pre-Imperial rulers.
Posted by Niccodaemus at 7:53 PM No comments: